October 12, 2021 – IK Multimedia is pleased to announce the T-RackS TASCAM® Tape Collection, a collection of AAX, VST and AU plugins for mixing and mastering. The new T-RackS TASCAM Tape Collection draws upon the strengths of four meticulously restored TASCAM analog recording systems long recognized for their glorious tone and other audible hallmarks. Developed with IK’s award-winning modeling technology and in direct collaboration with TASCAM themselves, the result of this coordinated effort allows musicians to introduce the warmth and classic characteristics of some of the finest analog recorders into today’s digital recordings-ultimately delivering the best of both worlds.

The TEAC A-6100 MKII, an upgraded version of the original mastering recorder first released in 1973 and still much sought-after today for adding tape warmth and color to recordings.

The TEAC A-3340S, released in the early ’70s, is the deck behind many famous song demos, and even whole albums made by some of the most influential rock bands ever.

The TASCAM 388, released in 1985, combines an 8-channel mixing console and an 8-track tape machine in one. Hugely successful, and still fetching high prices today, the 388 is revered for its warm and evocative sound.

The cassette-tape-based TASCAM PORTA ONE MINISTUDIO from 1984 was TASCAM’s best-selling PORTASTUDIO, introducing thousands of musicians to the joys of home recording. Even today, the PORTA ONE remains popular for creating „lo-fi“ sounds, creative experiments and even live performance.

A true collaboration
From the onset of this project, IK Multimedia and TASCAM agreed that the goal was to create authentic TEAC and TASCAM tape tone. To that end, TASCAM selected the specific unit of each model, each fully rebuilt and meticulously calibrated. And for even greater accuracy, TASCAM provided information about the analog tape these systems were biased for.

Davide Barbi, IK Multimedia’s Chief Technology Officer, commented on the new T-RackS TASCAM Tape Collection, „Since the onset of digital recording, musicians and engineers have been wanting an easy, seamless way to introduce the unique tonal characteristics of analog sound into the contemporary DAW environment. Our new T-RackS TASCAM Tape Collection does just that-with the accuracy, warmth, and subtle idiosyncrasies that made analog so special to begin with. Together with TASCAM, we have created a special set of tools that, I believe, have the ability to inject a new level of authenticity and vibrancy into a wide range of music and other recording efforts.“

Comprehensive controls
Each TASCAM tape machine module offers common controls such as input and output levels, selectable input and reproduction audio paths, and a carefully chosen selection of recommended and classic tape formulations-each with its own unique sonic character. A physically modeled alignment section lets users go beyond the regular audio alignment of the machines to experiment with the effect of different bias levels, recording levels to tape, and recording and playback EQs.

Additionally, IK Multimedia’s modeling team has included two popular features from IK’s Tape Machine collection. The Transport Modeling function accurately reproduces the small inaccuracies of the tape position in front of the head for incredible life-like performance, while True Stereo operation provides a perfect recreation of the stereo image effect produced by subtle differences that inevitably exist between the left and right channels on an analog machine.

The T-RackS TASCAM Tape Collection offers two ways to work: as a stand-alone AAX, VST2/3 and Audio Units plug-in, or inside the T-RackS 5 shell. Use these together with any of the other 48 T-RackS processors to mix and master faster than ever-creating a powerful, lightning-fast workflow. 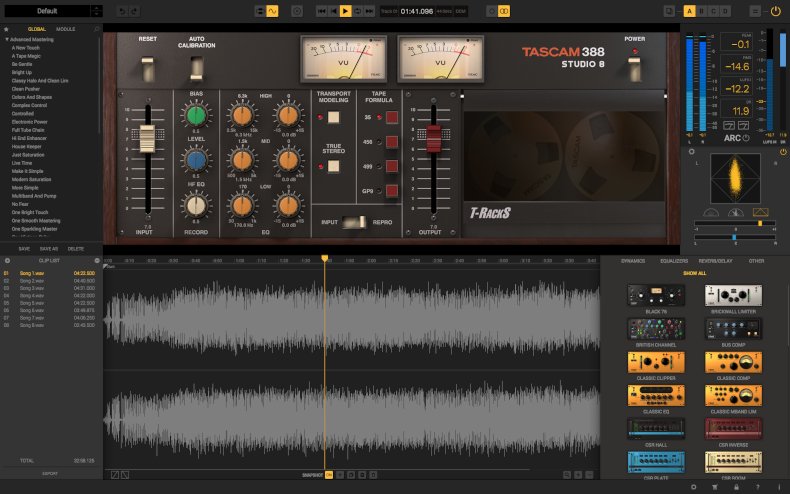 Pricing and availability
The T-RackS TASCAM Tape Collection is available for purchase from the IK Multimedia online store and from IK authorized dealers worldwide at a special limited-time introductory price of $/€129.99* (reg. $/€199.99). The four included individual TASCAM tape machines can also be purchased separately for a limited-time introductory price of $/€79.99* (reg. $/€99.99).