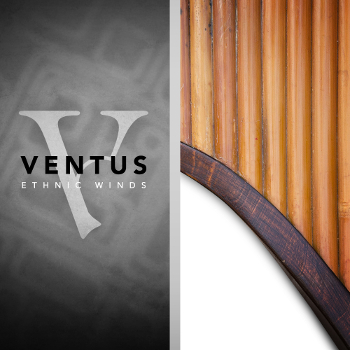 Amazingly, as a distinctive-sounding group of musical instruments, pan flutes — also commonly known as panpipes or, less so, syrinx — independently initiated all over the world, albeit all based on the principal of the closed tube, consisting of multiple pipes of gradually increasing length (and, occasionally, girth) created from various kinds of wood or reed. With that in (musical) mind, they are a perfect fit for Impact Soundworks’ suitably-named VENTUS ETHNIC WINDS series, deliberately designed to take users on a gripping global journey, capturing the tones of phenomenally performed solo woodwinds outside of the Western repertoire — Ventus being one of the Venti, wind gods in Roman mythology, who dwelt where their respective winds originated.

Originating in ancient Romania, the nai — a higher-pitched pan flute with an instantly recognisable sound featured on countless film score and albums, thanks to its beautiful and breathy tone — prominently played a part in Impact Soundworks’ latest VENTUS ETHNIC WINDS, willingly and ably performed by composer, arranger, and multi-instrumentalist Josh Plotner during extensive and exhaustive sampling sessions, successfully capturing all key articulations and a full range of playing techniques of the instrument in question — from expressive sustains, vibrato, flutters, and accents, to staccato notes and bends, pitched release articulations, and special extended techniques.

The lower-pitched and haunting toyo is a traditional Andean instrument with a rich history; it was originally primarily played by women, and, with its large size and multiple rows of pipes, often required two performers. These performers were musically bonded; neither could play the instrument without the other. The toyo belongs to a greater family of pan flutes known as siku, which, in turn, gives its name to the musical genre known as sikuri.

Saying that, the bright, breathy tones of both of these particular pan flutes can easily be used for ambient and soft stylings, but also respond well to extremely bright and agile playing with sharp staccatos, pops, and tongued notes. Needless to say, Impact Soundworks successfully captured their majesty — musically suited to evoking nature, sea, sky, and, appropriately (in this case), wind — for VENTUS ETHNIC WINDS – PAN FLUTES when recording them in a small studio’s suitably treated room to appropriately add ‘air’ to the two room microphones used alongside a close ribbon mic, resulting in two deeply-sampled pan flutes in two distinct sizes and pitch ranges with multiple dynamics and round robin (RR) variations with 24-bit sample depth. (Depth of another kind completely can come quickly courtesy of Impact Soundworks’ simple-to-use FX rack, with an analogue-modelled parametric EQ, COMPRESSOR, DELAY, and convolution REVERB.)

VENTUS ETHNIC WINDS – PAN FLUTES also includes over 650 phrases shared between its inbuilt NAI and TOYO instruments, all performed in a variety of styles and lengths that can quickly be used with KONTAKT, allowing authentic performances without technology getting in the way — which is, indeed, the concept behind the VENTUS ETHNIC WINDS series — or loaded as .WAV files for further editing, slicing, and arrangement within a DAW directly.

VENTUS ETHNIC WINDS – PAN FLUTES shares several key features with its series siblings, together with a common user interface, so anyone already familiar with VENTUS ETHNIC WINDS – BANSURI, VENTUS ETHNIC WINDS – TIN WHISTLE, or VENTUS ETHNIC WINDS – SHAKUHACHI before it will immediately feel at home here with traditional playable articulations alongside a large pool of pre-recorded phrases that can quickly be dropped into a composition for instant colouration; an innovative Ornaments System designed to automatically create decorative techniques in real time with no need to tweak further or add any extra sequencing; as well as Impact Soundworks’ proprietary TACT (Total Articulation Control Technology) to unify and simplify the process of creating personal mapping setups for each and every instrument. Those three features alone — alongside their creator’s hallmark depth of sampling and attention to detail — duly stack up to ensure that VENTUS ETHNIC WINDS – PAN FLUTES is destined to become another source of endless inspiration… time to join the journey and hear where it takes you and your music, maybe? Definitely, maybe!