Kemper Amps, the makers of the multi award winning and unique Kemper Profiler present a range of new features that significantly extend the Profiler’s tonal and sonic capabilities for guitar and bass players. Version 2.3 of the Profiler Software will be available for free to registered users of the Kemper Profiler during the first quarter of 2014.

Parallel Path for Bass Processing:
This is a feature dedicated for electric bass, can be utilized with any other instrument as well, of course. The Profiler offers a variety of profiles for bass players already, as well as loads of effects and distortion FX that can be used in combination with a bass. But, just like with traditional bass rigs when playing through a distorting amplifier or a distortion pedal, the bass can loose some fundamental bass frequencies. That’s why a parallel feed of the clean bass signal usually is mixed in parallel to the distorted or otherwise processed signal for maintaining the bass frequencies and the original dynamics.
The Profiler now features an optional parallel signal path from the instrument input straight to the output for exactly this purpose, bypassing the Stack section and all effects including the delay and reverb. When the parallel path is activated, it also grabs Stomp A and B away from the regular signal path and puts both into the parallel path. This provides Stomp A and B for applying a compressor and an equalizer individually to the parallel path, while Stomp C and D and the effects remain in the regular signal path. This is great for both live and recording situations.

Analog Octaver – Not only for bass players’ delight:
The analog octaver is a classic effect usually used by bass players. But of course it can be utilized for any instrument. The analog octaver adds two lower octaves (-1 and -2) to the original signal. This is achieved with a modeled analog detection circuit which manipulates and filters the input signal. The Analog Octaver should be used for single notes only as intervals or chords might create unstable results.
The Kemper Profiler octaver model features significantly improved tracking for faster response compared to the original devices. The LowCut parameter finally reduces the energy of the low notes. This allows for higher levels of both low octave voices without having to deal with deep growl and rumble produced.

NSA for Tempo – Beat Scanner:
The Beat Scanner is a great alternative to using the TAP tempo. The activated Beat Scanner algorithm will listen to the rhythm of the guitar and detect the accurate tempo in BPM in a few seconds. It is not required to play anything special, any riff should do if played with certain accuracy. Beat Scanner allows for creating tempos between 80 and 160 BPM. The Beat Scanner won’t detect whether the tempo is 70 BPM or double – 140 BPM. It will choose 140 in this case.

Headphone Space:
The Headphone Space parameter adds a small room simulation to the master signal. When listening to sound coming from loudspeakers the reflections from the floor, the walls and objects around add to the original sound. Even a mono signal will result in a stereo image once the room reflections reach the ears. When listening through headphones these missing reflections result in an artificial listening experience that quickly leads to listening fatigue. To avoid this, the Profiler now features the Headphone Space effect allowing to add virtual reflections to the headphone signal delivering a sense of room and natural space. Even a mono signal will result into a subtle, pleasing stereo image.
Hard wired to the Profiler’s headphone out the space effect can also be utilized for listening through regular speakers or for recording. For this purpose the space effect is also available for the post stack effects slots.

Pedal Vinyl Stop:
Vinyl Stop is a variation of the already available Pedal Pitch effect. While Pedal Pitch can create a „dive bomb“ effect three octaves down, Pedal Vinyl Stop will turn the pitch of the instrument down to exactly zero by swelling up the pitch pedal, just as you would stop a vinyl record with your hand. No sound is heard, until you swell the pitch pedal down again, making the instrument sound as the motor has turned back on again. No pitch adjustments available or necessary with this effect, just put the pitch pedal to the metal.

Reamping – everything built in to run High and Dry:
The method of Reamping is very popular in studios and means recording the unprocessed instrument signal while recording the processed amp signal at the same time on separate tracks. This allows for feeding the unprocessed guitar signal at a later time to an amp again to experiments with various settings that might cater for a better mix without the need to play the guitar a second time. Usually some special equipment is required to convert the high impedance guitar signal into an appropriate signal at studio level for recording. The opposite „reamping“ path from the recording to the tube amp needs appropriate processing as well. In case of the Profiler this is much more straightforward and easy as the connections and impedances of the Profiler already deliver all the required connectivity for reamping right out of the box. Both recording the pure instrument signal and reamping can be performed either via the analog outputs and inputs or the SPDIF connections. 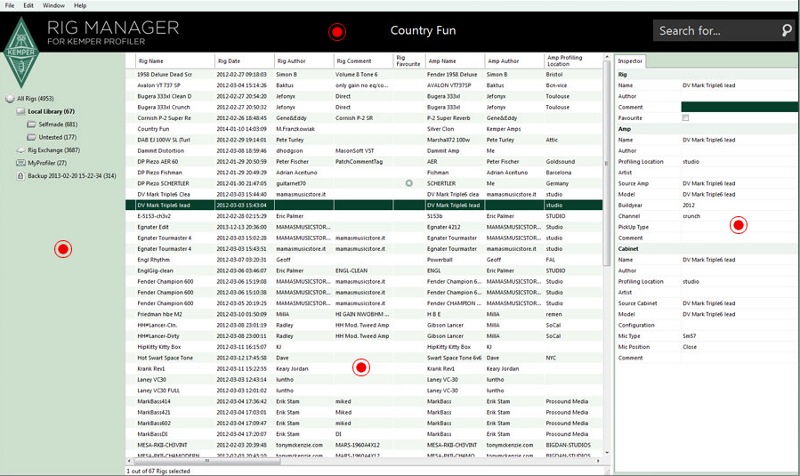 RigManager is free of charge and available during Q1 2014. A Mac version will be released later this year.