Modartt introduces Organteq Alpha, a new generation of physically modelled pipe organs that reproduces the complex behaviour of the organ flue pipe. It is provided for free as a foretaste of a more advanced commercial version to be released during 2018. 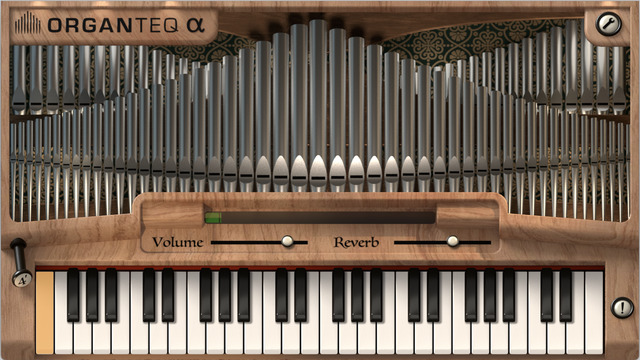 Organteq Alpha:
Modartt, the producers of the award-winning physically modelled software instrument Pianoteq, hereby introduce Organteq Alpha, a new generation of virtual instrument that models the complex physics of organ flue pipes. Organteq Alpha is a small organ with a keyboard range of 4 octaves (from F1 to F5) and with 2 stops: a Flute 8′ and a Flute 4′ (octave). It is provided in standalone mode and should be regarded as a foretaste of a more advanced commercial version in development, due to be released during 2018.
The physical model:
The new generation physical model for organ, created by Modartt, provides a technically sophisticated reproduction of the interaction between the air jet and the pipe. It brings vividness to the instrument, especially during attack transient, reproducing natural speeches of organ flue pipes, and also during the sustain, where the wind fluctuations induce variation in pitch and amplitude. During the release transient, as the jet diminishes, the air jet/pipe interaction breaks and thus allows the pipe to vibrate on its own resonances, producing glitches in pitch.
Free download:
Organteq Alpha is free. Visit the website www.organteq.com to listen to audio demos and find out more.