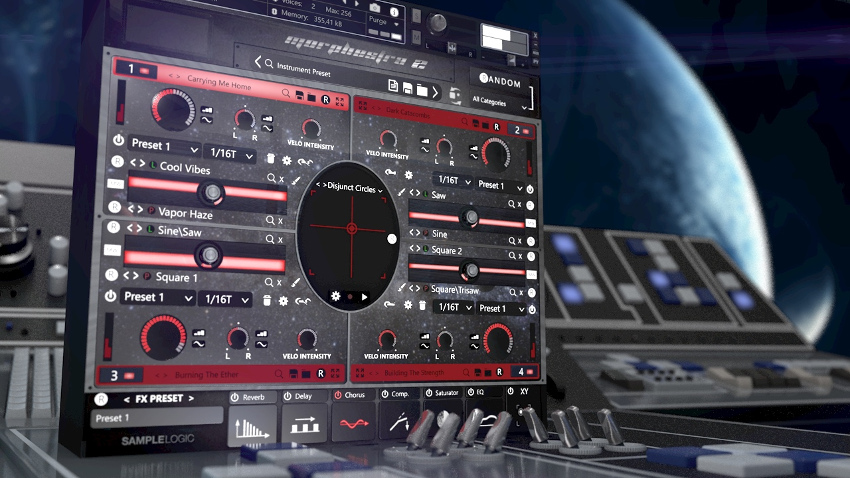 Powered by Native Instruments’ industry-standard KONTAKT 5 platform — both KONTAKT PLAYER (available for free) and full retail version (sold separately) — for Mac OS X 10.9, 10.10, or 10.11.1 (latest update) and Windows 7, 8, or 10 (latest Service Pack) with Standalone, VST, and Audio Units compatibility, MORPHESTRA 2 weighs in impressively with over 1,100 SOUNDSOURCES; 635 SOUNDCORES; 3,300 morphed cinematic instruments; and a 26 GB compressed sample library using KONTAKT’s lossless sample storage compression with all samples duly delivered at 44.1 kHz/24-bit.  Geared up for film, TV, and game composers, MORPHESTRA 2 comes complete with 10GB of all-new sample material and also includes all of the content from Sample Logic’s lauded MORPHESTRA GENERATIONS release — that’s over 16GB of morphed instruments and multis entirely derived from true orchestral recording, as well as the multis from the original MORPHESTRA. It is this creative combination that takes MORPHESTRA 2 to the next level as the most comprehensive modern-day virtual instrument available anywhere!  Producing MORPHESTRA 2 was a labour of love that saw Sample Logic going back to the core of MORPHESTRA to create all-new diverse instruments for the latest release. Studio and field recording sessions covered a diverse range of musical instruments — including brass, drums, guitars, strings, symphonic percussion, voices, waterphones, woodwinds, and world percussion — as well as more offbeat sound sources, such as animals, machinery, tools, and warehouses. A number of unique world instruments were additionally manipulated using Sample Logic’s proprietary morphing and synthesis techniques to create all-new, never-before-heard organic instruments and hybrid ensembles. All recordings were manipulated, morphed, and processed throughout the various stages of production — both during the sampling and programming phases — and beyond using MORPHESTRA 2’s realtime customisable dynamic core user interface.  Indeed, that stunning user interface was designed with the modern-day composer and sound designer in mind. It puts the user in the driving seat by providing effortless dynamic controls for complete realtime customisation — create, produce, and perform at will with the greatest of ease! All 5000-plus presets are housed in a single MORPHESTRA 2 instrument, allowing users to dynamically change many preset attributes on the fly to sculpt and design sounds.  Just like Sample Logic’s (relatively) recently released CINEMORPHX before it — bringing the future to the present as a groundbreaking cinematic virtual instrument library fit for sound design, music production, and more, the MORPHESTRA 2 interface for KONTAKT includes dozens of fully-customisable effects presets with hot-swappable FX chain technology and all-new effects insert modules allowing the SOUNDCORE FX and MASTER FX chain to be built and reordered in realtime.  Really it is the company’s malleable MULTI CORE system — flexible four-SOUNDCORE engine that allows simultaneous playback of up to eight SOUNDSOURCES — that brings MORPHESTRA 2 to life. Likewise, Sample Logic’s proprietary Morph Animator, Step Animator, 3D Mixer — which allows for seamless morphing between the four SOUNDCORES — all make a welcome return, resulting in a satisfyingly user-centric focus and freedom to infinitely transform instruments and sounds into ear-bending, evolving affairs with endless possibilities! Add the only X-Y mixer for a KONTAKT-based virtual instrument into the mix and inspiration and creation come quickly.  And if that’s not quick enough then Sample Logic has helpfully equipped over a dozen parameters within the MORPHESTRA 2 interface for randomisation, allowing anyone to rapidly tap into trillions of starting point combinations with creative effects. Simply arm the randomisation feature, and prepare to fire! The interface’s intelligent randomisation technology will guaranteed generate instantaneous inspirational results — every time!  With MORPHESTRA 2 content covering both ATMOSPHERES (continuously-sustained soundscapes that are static or full of organic motion); INSTRUMENTALS (Arpeggiated, Bells – Mallets, Keys, Loops, Strings, Synths, and Winds); and PERCUSSIVES (Impacts, Impact Sequences, Kits, Loops, and Transitions), Sample Logic has demonstrably got even the most discerning film, TV, and game composers covered here in a dynamic world where music and sound design desirably collide. Check it out and come away wanting it!

MORPHESTRA 2 can be ordered online and directly downloaded from Sample Logic for a time-limited introductory discounted price of $399.99 USD — rising to $499.99 USD thereafter — from here: https://samplelogic.com/products/morphestra2/(Time-limited introductory discounted cross-grade pricing of $199.99 USD is available to MORPHESTRA GENERATIONS owners, rising to $249.99 USD thereafter.)