SANTA CRUZ, CA, USA: Plugin Alliance, a new ‘Über-standard’ supporting all major plugin formats and uniting some of the best-known international audio companies under one virtual roof, is proud to announce availability of the latest (v1.1) update of Sandman Pro — Plugin Alliance partner Unfiltered Audio’s undisputed ultimate delay, doubling as a transmogrifying time machine making serious sonic travelling more musically adventurous than ever, thanks to major performance improvements and some serious upgrades to an already killer feature set — as of May 26… 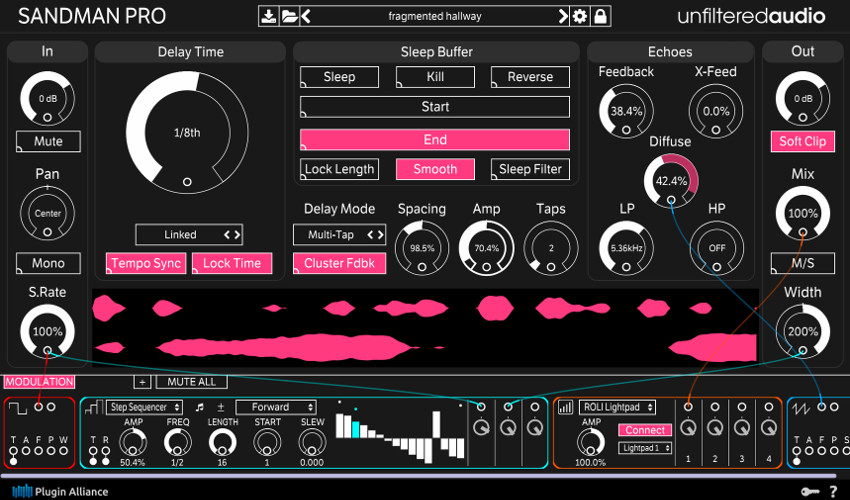 Billed by its collective creators as The Delay of Your Dreams, mix engineers, sound designers, and DJs alike were wowed by the slice and dice brilliance of Unfiltered Audio’s original Sandman soon after it was unleashed upon an unsuspecting world as a world-beater. But Sandman is a delay plugin with a severe narcoleptic bent, using its SLEEP mode to freeze its delay buffer to create stunning loops and grains that can be re-pitched, down-sampled, played in reverse, dirtied with noise, and modulated — mutating and transforming sounds beyond all recognition! Really short delay times alternatively allow the shape-shifting Sandman to become a flanger, percussion resonator, stutter generator, or wavetable synthesizer. Sandman also excels at producing traditional echo and stereo ping-pong effects, enabling delay times to range from standard slapback to longer than a coffee break… and all without breaking into a programming sweat!  Saying that, those mad scientists at Unfiltered Audio are always far from resting on their talented laurels. Buoyed by Sandman’s success, Sandman Pro pushed its little brother’s versatility up several notches. Needless to say, Sandman Pro proactively set a benchmark for developing delay plugins, paving the way for elaborate effects like stereo pitch shifting, reverse echoes, and frozen delays, but peel back a layer and Unfiltered Audio’s mind-bending modulation system is revealed in all its patchable glory, guaranteeing a near-infinite world of aural possibilities to die for.  Furthermore, the latest (v1.1) update of Sandman Pro continues to break new ground, modulation-wise. With the addition of a new mode for seamless integration with ROLI’s revolutionary Lightpad Block control surface, Sandman Pro users can now take advantage of the trailblazing hardware’s uniquely smooth, glowing, pressure-responsive design for an unprecedented level of realtime control over multiple parameters with the greatest of ease. Elsewhere, they can create sequences to modulate parameters or even other LFOs — themselves now resettable via a trigger input — with the new Step Sequencer modulator, making use of an expanded choice of interface scaling options while doing so. Ultimately, Unfiltered Audio’s flagship modulation system now boasts eight freely-assignable and fully-automatable modulators with intuitive drag-and-drop patching to each and every one of Sandman Pro’s creativity-inducing controls. An ability to minimize modulators by clicking on their icons is another addition which will be welcomed, workflow-wise, by seasoned owners already hooked on this truly transmogrifying time machine.  Musically more adventurous then ever, then, Sandman Pro comes complete with seven delay modes — Classic Tape, Modern Instant, Pitch Shifter, Glitch Shifter, Multi-Tap, Reverse, and No Echo — each with dedicated, adjustable controls — that greatly expand its sonic palette while driving maximum delay times to a staggering 16 minutes! Classic Tape mode makes light work of lathering echoes, loops, and grains with virtual tape saturation or wow and flutter, while an artifact-free Multi-Tap mode bestows 16 simultaneous delay lines upon vocals or guitar solos for deep doubling or stadium-sized echo effects. The ultra-smooth Reverse mode can create click-free, haunting echoes like no other, and, unlike using other delays, Modern Instant mode modulates delay time without producing any audible artifacts in terms of pitch — perfect for cleanly transitioning vocal effects from doubling to echo trails at the end of a phrase, for example. Use the dual-mono Pitch Shifter mode to create vocal harmonies, classic shimmer effects, metallic textures, and more; Glitch Shifter for funky pitch shifting; modulate the Sleep button in No Echo mode for crazy-sounding stutter and glitch effects… surely Sandman Pro does everything everyone wants a delay to do and a multitude of things that they never imagined a delay could do!  Damaged, squeaky clean, or anything in between, the range of tones and textures that Sandman Pro can comfortably achieve is almost limitless… let the diffusion network layer reverb with echoes and multi-tap delays when using high feedback levels; offset the left and right delay times with stereo delays and apply cross-channel feedback to create complicated polyrhythmic ping-pong echoes and phase-y-sounding Sleep Buffer loops; transform grains with backward envelopes by reversing the Sleep Buffer, or lock the length of the Sleep Buffer and adjust its Start and End points to change the grain’s pitch.  Put it this way: with delay times ranging from 5ms to a whopping 1,000 seconds (when used in conjunction with Sample Rate reduction); a Sleep Buffer that can be reversed, re-pitched, down-sampled, trashed with noise, modulated and shaped with built-in lowpass and highpass filters; Feedback, X-Feed, and Diffusion parameters to create thick delay tails or even reverbs; an M/S mode outputting mid and side signals on left and right channels, transforming it into a mid-side encoder; an M/S Width control adjusting the wet signal’s stereo field from mono to stereo to super-wide stereo; a Soft Clip function for providing analog-style saturation at its inputs and outputs; and a waveform display for visualising the effect of control tweaks in realtime, Sandman Pro is perfectly positioned to handle any delay duty… or take its users down a rabbit hole of unchartered sonic territories!  Truly The Swiss Army Knife of Delays, Unfiltered Audio set a benchmark with its Sandman Pro plugin flagship from the outset — one that has yet to be bettered… until now. Needless to say, the latest Sandman Pro update ups the delay ante again. As David Arnold might well testify: no shit, Sherlock!

Note that the proprietary Plugin Alliance Installation Manager means users can select, download, and install only the products and formats needed for their system.